02.06.15 Taipei, Taiwan – At this year’s Computex, CRYORIG is revealing the next generation of Hybrid Liquid Cooling (HLC) units and IoT enabled power supply units. CRYORIG’s new A Series A40, A40 Ultimate and A80 Hybrid Liquid Cooling units combines the strength of both Air Cooling and Liquid Cooling in an innovative package. CRYORIG’s Pi Series of Power Supply Units with IoT or Internet of Things capability, allows users to remotely control their PSU unit’s through phones apps. 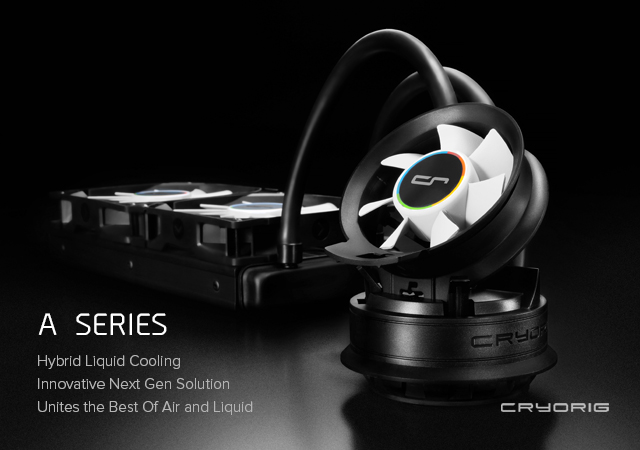 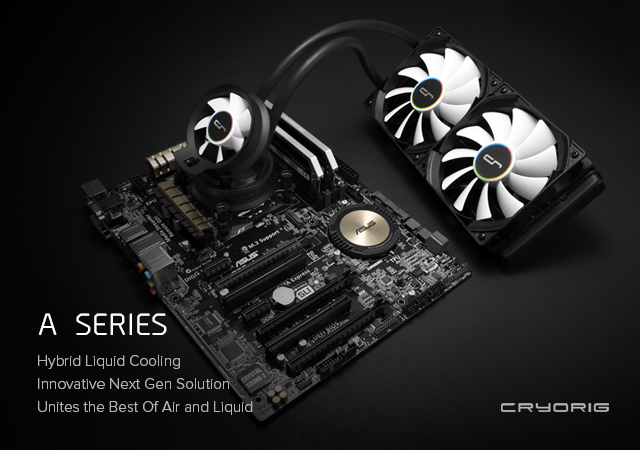 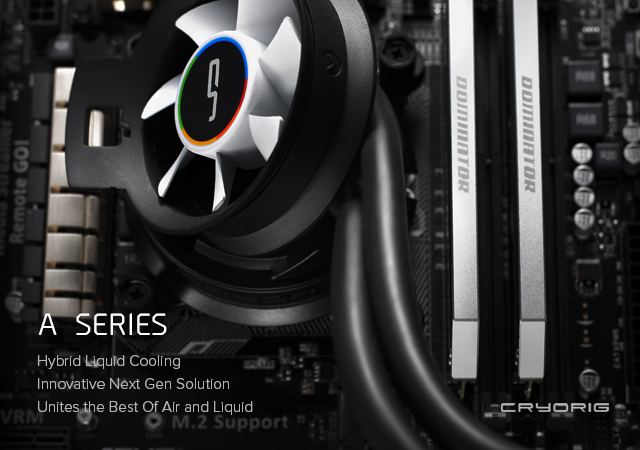 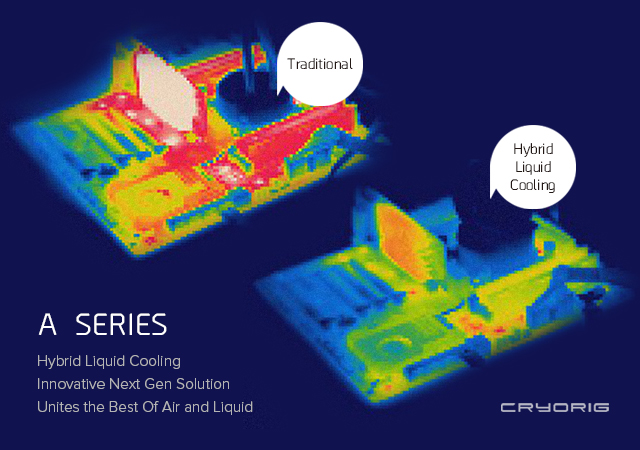 CRYORIG’s A Series Hybrid Liquid Cooling (HLC) products is designed to solve one of the major problems with Closed Loop Cooling liquid units, which is the severe lack of airflow for the CPU’s surrounding components. At Computex, CRYORIG’s live thermal imaging demo shows the potential impact of how HLC can benefit the system. Heat imaging shows a drastic drop of over 10° Celsius in regions of the surrounding Voltage Regulator Modules, RAM and even the GPU card can benefit from added airflow from CRYORIG’s patent pending proprietary Airflow Circulator fan. In lowering the surrounding heat of these areas, systems may achieve benefits ranging from higher stability and component life span, and may even achieve better stable performance and overclocks for the CPU/RAM and GPU. The Airflow Circulator fan can be removed and attached in reverse along with adjusting your CPU water block allows users to choose which way they want the Airflow Circulator to point at, be it RAM, GPU or VRM areas. The Airflow Circulator is a 3.000 RPM PWM control enabled 70 mm fan, that intelligently adjusts it’s RPM based on CPU temperature. It’s variable spin rate allows it to be virtually inaudible over the other working fans in the system and radiator. There are three models in CRYORIG’s initial HLC lineup: the A40, A40 Ultimate and A80. CYRORIG’s A Series HLC units will be available in Summer, 2015. 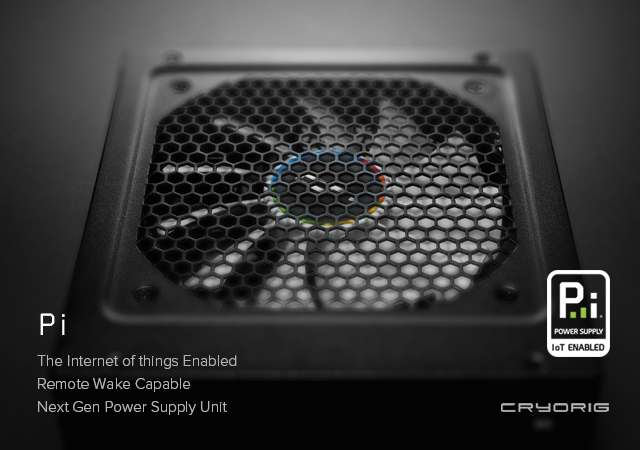 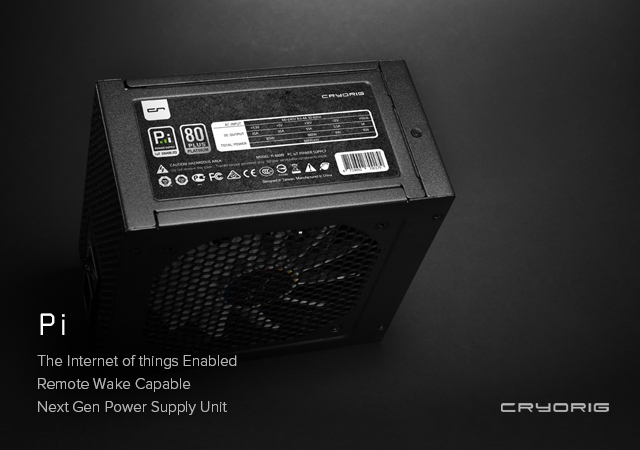 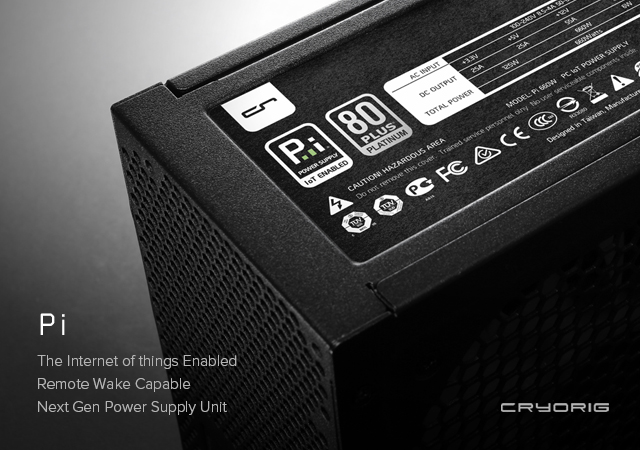 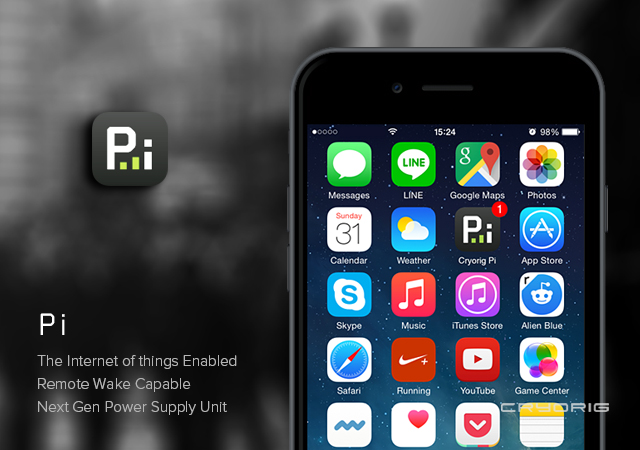 CRYORIG Pi is the innovative proof of concept Power Supply Unit (PSU), which will be demoed during Computex, 2015. The CRYORIG Pi combines IoT capability with a PSU to create a brand new way of managing and controlling your PC. IoT or Internet of Things is a gaining momentum in home electrical appliances, allowing control and monitoring of everything electrical within the house hold. CRYORIG’s initial intention to add IoT capabilities into a PSU unit was to overcome the difficulties of configuring Wake on LAN, and Wake on WAN functions when trying to use remote desktop like applications. CRYORIG patent pending Zero Hassle Hardware Wake (ZHH Wake), directly controls the PSU and mainboard on/off signals, the IoT enable Pi PSU does not need any type of configuration other than pairing to an internet enabled WiFi signal. Wake up a remote PC to perform remote desktop functions. Remote wake your file sharing or distribution computing PC after a local power outage. Remote close your PC ahead of a thunder storm, or just simply check if you remembered to close your PC with sensitive material after leaving the home or office. The application of the IoT enabled Pi is almost limitless. From this base CRYORIG’s Pi line can extend further capabilities such as fan speed control, energy usage recording and management, electric bill estimations as well as PSU health and deterioration reporting all directly to a mobile phone app. The CRYORIG Pi line of Power Supply Units is targeted for release in 2016 with wattage ranging from 600 to +1000 Watts, and 80+ Gold to Platinum certifications.